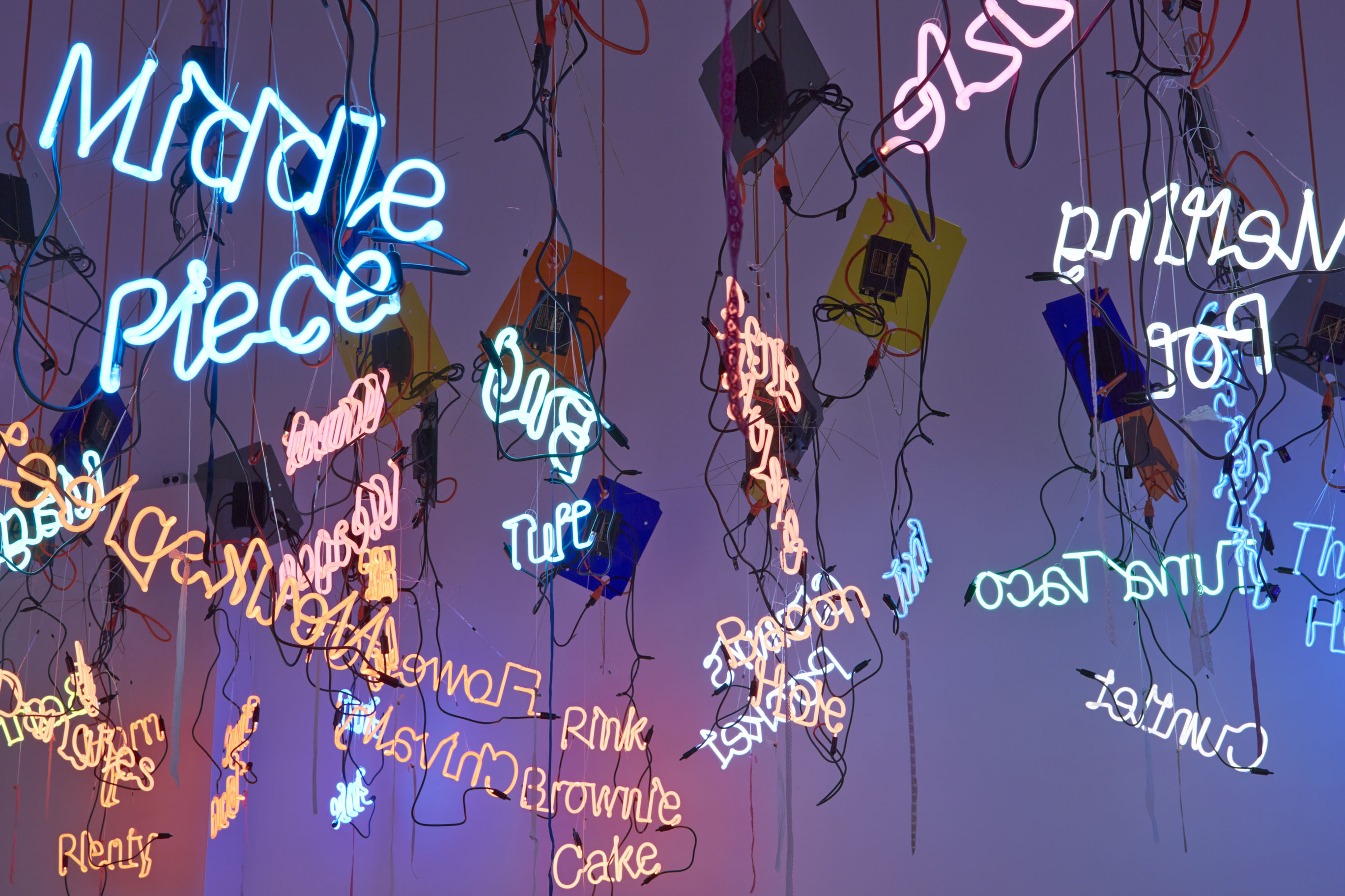 Among the many reasons for organizing a survey of the work of Jason Rhoades were the provocative terms of its engagement with issues of art conservation. As a protean artist who rendered truckloads of consumer goods and construction materials into installation based sculptures, Rhoades claimed his work to be definitively open-ended: “If you know my work, you know that it is unfinished,” he said, and he upheld that intention by using every opportunity to re-install his work as a chance to recreate it. I experienced this firsthand, the one time I worked directly with the artist, when what started as a sprawling installation of objects on tables from 1994, entitled Great See Battles of Wilhelm Schürmann, was transformed into a 20-foot tall suitcase for the 1997 traveling exhibition Deep Storage. 1 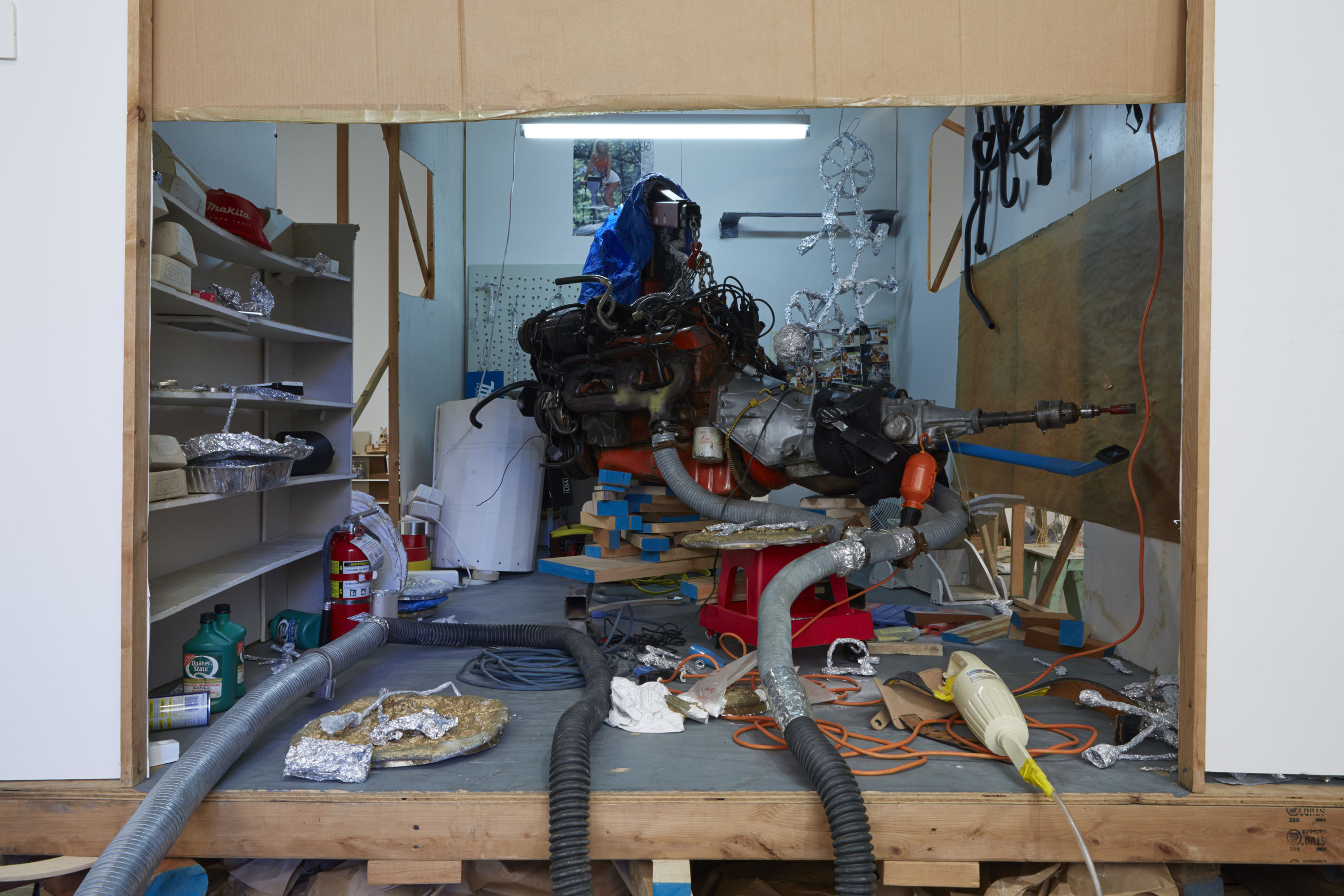 Throughout his life, Rhoades treated his work—along with virtually everything else, the more sacrosanct the better— as raw material for his art. When he died in 2006 at the age of 41, and the flux and flow that shaped his work suddenly, tragically ended, it was as if a spell were cast in the form of a question: how to proceed without the artist’s animating presence? Years elapsed in curatorial silence around Rhoades’s art. By the time I initiated the idea of a survey, it was clear that this project was going to be as much about opening up Rhoades’s art for viewing and interpretation as it was about embracing a battery of issues, problems, and questions advancing across the field of contemporary art.

Jason Rhoades, Four Roads was held at the Institute of Contemporary Art (ICA), University of Pennsylvania, Philadelphia, in 2014 and subsequently traveled to Kunsthalle Bremen, Germany, and BALTIC Centre for Contemporary Art, England.2 The exhibition featured four of the artist’s epically-scaled installations, which filled the museum with a thrumming network of imagery and thinking about labor and class, cars, guns, cowboys, consumer culture, American identity, entrepreneurship, craft, insider and outsider strategies, myth-making, freedom and democracy, permanence and obsolescence, physicality and ephemerality, and power. Indeed, the exhibition drew much of its own power from the precariousness of these various conditions within contemporary culture.

The exhibition also contained a seemingly boundless range of materials and methods—from felt-tip pen drawing on foam core to live performance, from neon lights to computer game technology—making it a microcosm of contemporary mediums and practices, along with all of the inherent vices and future dilemmas packed therein. At every turn, the ICA exhibition confronted problems that reflect the challenges of preserving installation-based art.

A gallery-sized container for an oily, hulking, dripping V-8 engine, Garage Renovation New York (CHERRY Makita) (1993) was the earliest work in the show, and the most fragile. The garage and its elements were like a giant school craft project made from a collage of foam core, tin foil, cardboard, Q-tips, and popsicle sticks. Rhoades, who liked to push materials to their limits, perversely used sheetrock structurally as if it were plywood. A crumbly sculpture of a tool chest had to be reproduced and shown in the form of an exhibition copy. Other components had already actively disappeared over the years, such as the faces of the counterfeit dollar bills, minted on sheets of butcher block paper that had thirstily absorbed the oil markings. Then there was the cocaine. (A lot was going on under cover of this garage.) Sheetrock powder was carefully swept into increasingly thinner lines throughout the duration of the show. Rhoades hated dust and was not interested in the patina of time incurring on his work’s appearance of being fresh and new. In light of all of these factors, to what degree should we attempt to stave off the inevitable?

When to replace and when to restore the elements of an assemblage work of art was the leitmotif of The Creation Myth (1988): a massive model of the artist’s brain at work—all neurons firing. Myriad questions were raised by this networked system of machines, tools, projectors, games, and other consumer electronics that demanded constant attention. For instance, Rhoades had recorded hours of hip hop AM radio on cassette tapes, which we initially played, randomly, as intended until the reality of magnetic tape’s obsolescence compelled us to transfer the recordings onto an iPod. As small as a credit card, the player was slipped under the car radio that then only appeared to pump the brain with the sound. Having his work work was important to Rhoades. What was once the top-of-the-line Ferrari of smoke machines is now a leaky fussy contraption; the fact that the brain’s “asshole” continues to blow perfect smoke rings every two minutes seems miraculous testament to the artist’s ingenuity. Likewise, with the Nintendo play station, the live-feed camera networked with a computerized stream of images, and the fan that balloons the “stomach” with air. Too bad the original toy train (“of thought”) drove off its tracks one too many times and had to be replaced. Fortunately the original company still exists and manufactures the same model. 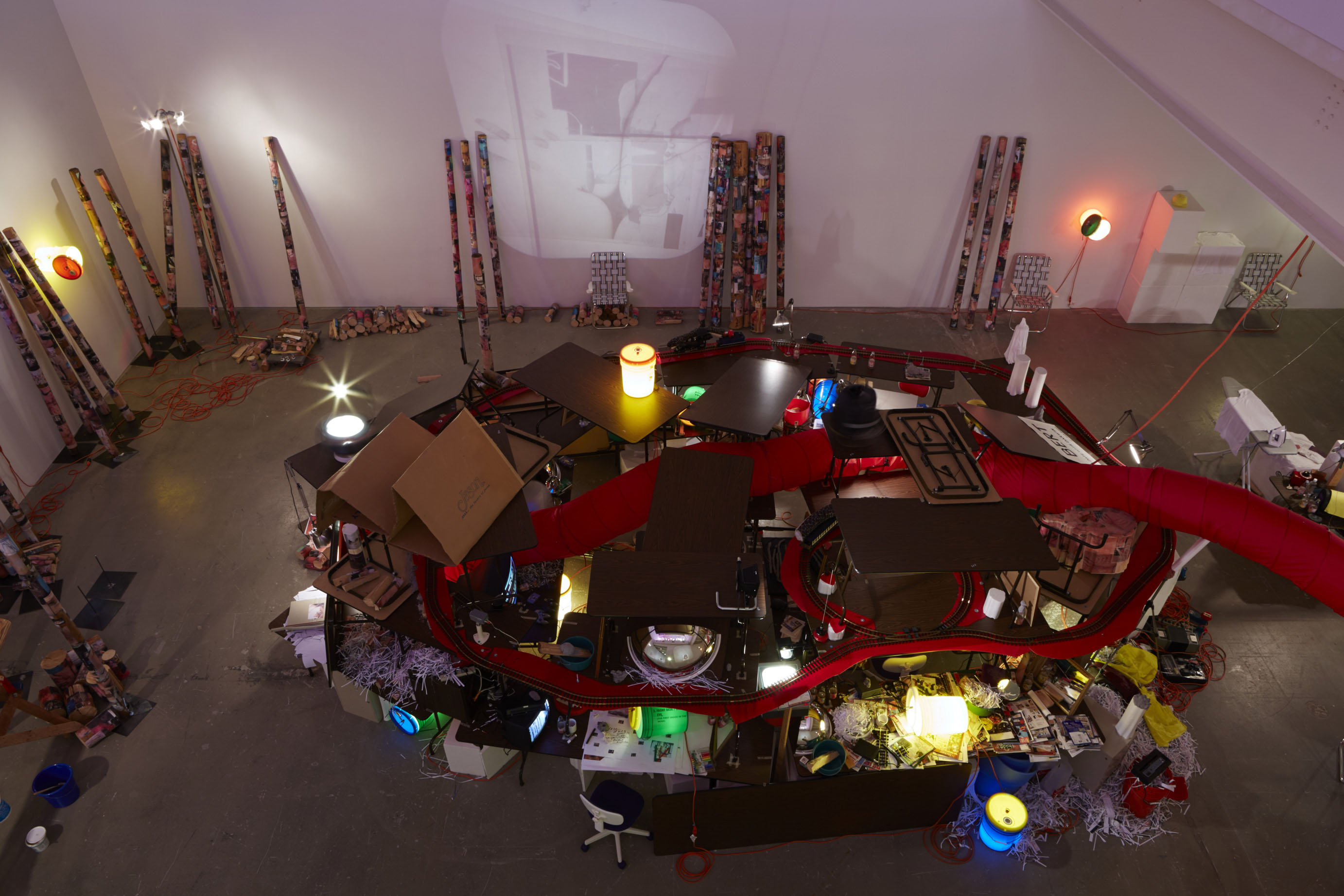 In contrast to the technological display of The Creation Myth, the third installation Sutter’s Mill (2000) was a show of good old-fashioned construction—and deconstruction (pun intended). Based on the sawmill in the story of the California Gold-rush, Sutter’s Mill featured a gleaming scaffold of polished aluminum poles. On alternate days throughout the run of the exhibition, this structure was taken down and put back up by a pair of technicians. Working methodically and continuously, they followed a set choreography of moves learned from the former studio assistant who had originally performed the piece and whom we had brought to Philadelphia from Los Angeles to train our crew.

The importance of the hand, and of handed-down gestures and techniques may not be immediately apparent given Rhoades’s off-the-shelf aesthetic. But one only need look at the hundreds of yards of orange extension cords, draped and drawn across the upper registers of the gallery space in the final installation, to see what a formalist Rhoades was. To install Untitled (From My Madinah: In pursuit of my ermitage…) (2004/2013), we brought in another specialist, this time from Zurich, who had worked closely with the artist throughout the period during which he made these late neon installations. As he trained a new preparator to embody the particular touch and weight of those looping, draping lines, it was beautiful to watch, and profound to realize, how much craft, skill, knowledge, experience, and labor was being returned to Rhoades’s art. After the neons were hung, the next challenge was to configure the floor elements: a scattered mosaic of bath towels adhered with streams of hot glue. It took over a week of trial and error to get the color and viscosity of the glue to look properly seminal.

Jason Rhoades, from My Madinah: In pursuit of my hermitage…, 2004/2013, installation view
Institute of Contemporary Art University of Pennsylvania
Photo: Aaron Igler/Greenhouse Media

Paradoxically perhaps, what made Jason Rhoades, Four Roads so successful at ICA was that we approached the installation the way a museum dedicated to working with contemporary art does best: the work was alive to us. Whatever questions its installation gave rise to were simply problems be solved. Starting with the absence of the artist, we turned to Rhoades’s writings and notes, and to the instruction manuals he had created largely for his own reference since he remained actively involved in the reinstallation of his work throughout his lifetime. We worked closely with the artist’s estate and studio manager (whose involvement was essential), with the two galleries that represented Rhoades throughout his career, and with artists, scholars, curators, dealers, and collectors who were close to Rhoades and his art. It was a collective and discursive effort on every level, as well as a generative one. In the process of making this exhibition, we identified sources, created templates and guidelines, produced a complete inventory of all of the elements of The Creation Myth along with detailed digital documentation (on iPads) of the installation process, and passed along essential embodied knowledge of Rhoades’s art to a new ring of hands.

As the exhibition traveled, the experience of reinstalling Jason Rhoades, Four Roads further demonstrated the crucial value that exhibiting contemporary art plays in its active conservation. Or, put another way, Rhoades’s art shows us (albeit in terms at times ridiculously gargantuan and leveling) the new terms of contemporary art, which demand active participation in the work to keep it alive.

This essay is based on a talk given at the symposium “The First Crack: Conservation and Value in Contemporary Art,” held in New York on April 29, 2015 and organized by the School of Visual Arts and Contemporary Conservation, Ltd. I would like to thank Christian Scheidemann for inviting my participation, and for his generous conversation about his work with Jason Rhoades, who had a keen and lively interest in issues of conservation. I would also like to thank my colleague Robert Chaney, ICA’s Director of Curatorial Affairs, for accelerating into every turn of realizing Jason Rhoades, Four Roads.

1This exhibition was, in part, a curatorial thinking about the lives of artworks over time. See Ingrid Schaffner and Matthias Winzen, eds., Deep Storage: Collecting, Storing and Archiving in Art (New York: Prestel, 1998).

Ingrid Schaffner is Curator of the 2018 Carnegie International at the Carnegie Museum of Art in Pittsburgh. From 2000 to 2015, she led the curatorial program at the Institute of Contemporary Art, University of Pennsylvania, in Philadelphia.