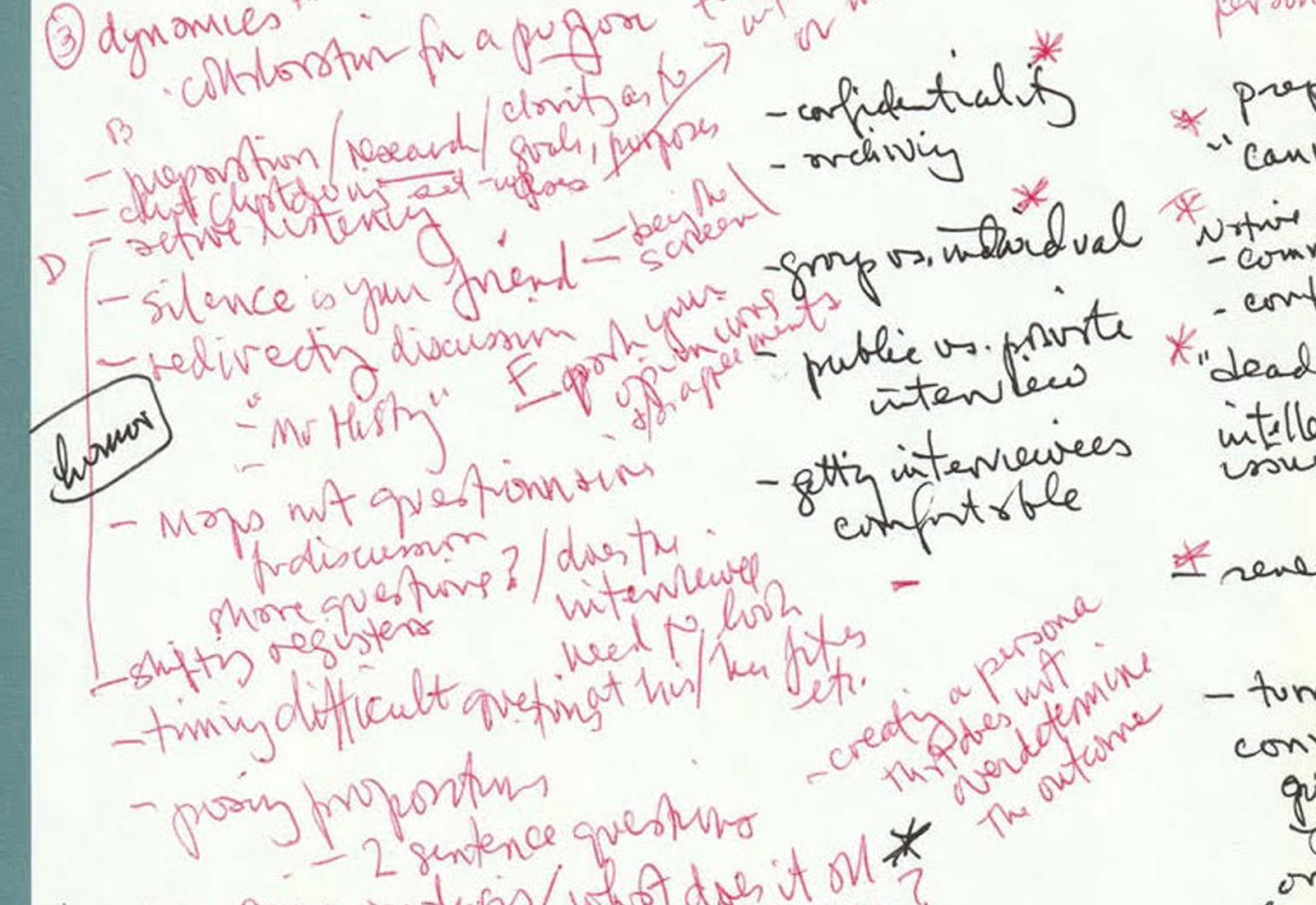 Since their inception, and throughout the years of fine-tuning that followed their official launch in 2012, the central tenet of the VoCA Artist Interview Workshops has been that successful interviewing requires listening, mutual exchange of differences between interviewer and narrator, more listening, more exchange, leading to a gradual deepening of understanding as researcher and narrator jointly reflect on questions and problems vital to both.

For me – as both a historian of U.S. culture and thought and one of the founders and co-leaders of the Workshops, alongside conservator Jill Sterrett – probably the most important take-away point from the workshops referenced the admonition the Delphic Oracle gave all who came seeking to find out if future projects would succeed or not: “Know thyself.”   Meaning in the case of conducting an interview, interviewers need to be clear about their objectives so they can explain why they are doing the interview and what they are trying to learn.  “Know thyself” also means that interviewers should reflect on who they are in the world and the numerous factors that will affect, for better or worse, what narrators will share.

However, in The Marriage of Cadmus and Harmony the classicist Roberto Calasso reminds us that for the pious of the ancient Mediterranean, the adage had a more important, deeper meaning: since humans are by definition mortal and imperfect, they can never know anything fully, themselves the least of all.  To “know thyself” is to accept personal limitations and, thus, to be prepared for surprises.  Interviewers have practical purposes when they set out to conduct an interview.  Often the interviewer faces a pressing deadline.  Yet those who enter into dialogue must let themselves become available to ideas and feelings that differ, often intensely, from their own.  The process of exchange at the heart of interviews presents new ideas and questions that demand further investigation.  When we listen with the idea that no matter how much we already know, we have more to learn, conversation leaps beyond providing “information” and introduces unexpected perspectives.  A shared world turns new, is perhaps fuller, and can definitely be strange and demanding.  Jill and I wanted the Artist Interview Workshop to explore what it means to enter into a productive relationship with another person rather than provide a checklist of techniques with their dos and don’ts.  We were happy to provide a list of key take-away points, presented in a form we hoped encouraged further reflection.

Since 2018, others have taken over leading the workshops, but the dialogue between a historian experienced in oral history interviewing and an arts professional equally versed in the art of interviewing remains.  That the two leaders approach the challenges from distinct disciplinary standpoints has remained the pivot for the entire workshop experience because their conversation demonstrates in practice the process of becoming aware of one’s own unexamined assumptions.  Special VoCA workshop programs were developed for graduate students in conservation and art history, followed by an adaptation of the workshop to address the unique questions that arise when interviewing artists working in time-based media.  In 2020, in response to the challenges of the pandemic, VoCA redesigned the workshop so it could be presented on Zoom. Next year, VoCA intends to offer a Spanish-language version of the workshop, with the curriculum revised to take into account the long history of interviewing artists in the Spanish-speaking world.

The articles in this issue of VoCA Journal express the reflections of seven of the nearly 725 people who have participated in the workshop over the last decade and how they applied what they learned to an amazingly broad range of practical problems:

Nothing can substitute for the experience of attending a workshop, but these seven wonderful reflections convey the thrill of joining a group of engaged and intelligent people and learning from their efforts to make exciting projects even better. Dialogue has been the center of the VoCA Artist Interview Workshop, dialogue that occurs in the course of the sessions, but also in between and after.  Many projects have been enriched by a sharing of perspectives and experiences that began in the course of an Artist Interview Workshop and then continued long after. I extend my gratitude to our authors for sharing their insights and reflections with us, and to our editorial committee for their work on crafting this issue. The occasion of the 10th anniversary of the Workshops has similarly provided me a moment to pause and reflect; I believe these notes from the 2014 Lunder Conservation Center program, which served as the basis for the standardized Top Ten Workshop Takeaways, also shown below, provide a summary of my thinking.