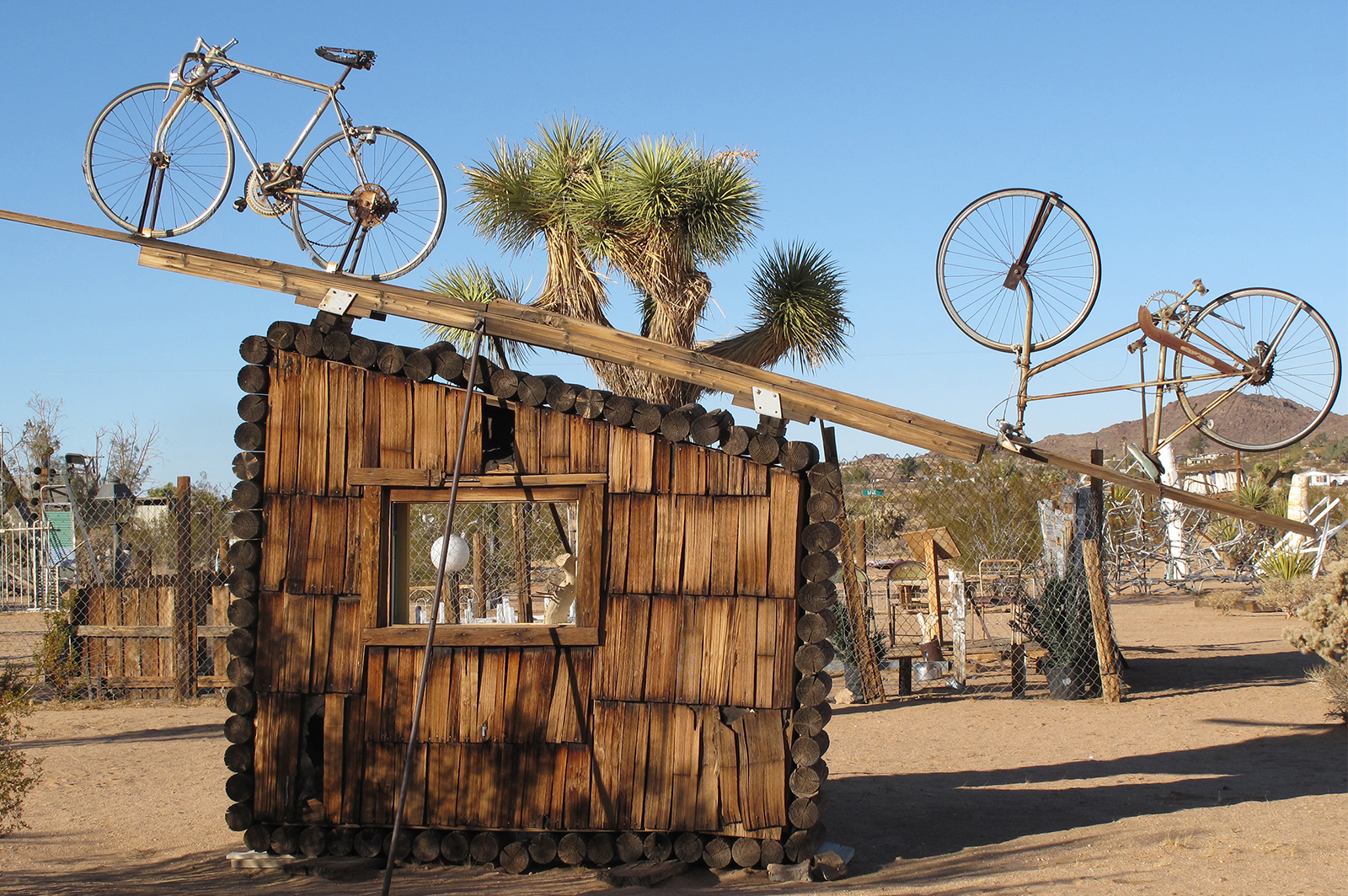 Richard Cándida Smith served as President of the Noah Purifoy Foundation from its inception in 1998 until 2001, when Joseph Lewis succeeded him. Recently the two sat down to discuss where the Foundation started, how it has evolved since then, and what’s next on the horizon.

Richard Cándida Smith: How did you come to know Noah and his work? When you were a young artist just starting out, what did his example mean for you?

Joe Lewis: In early February of 1997, my phone began jumping off the hook. Everyone I knew in Los Angeles was telling me to see an exhibition at the California African American Museum by some guy named Noah Purifoy. Off I went to CAAM and was totally blown away by Noah’s work. His use of exotic material—trash, in particular—to build relationships, was laced with humor and irreverence; its physical presence was overwhelming. Moreover, the crafting was an inextricable component of his tightly knit conceptual lexicon, speaking many languages simultaneously.

As it happened, he had an artist talk at CAAM the same day. His conversation was direct, philosophically robust, and multilayered. I learned about his holistic influence on the field, not only as a maker but as a force behind the scenes. He was a founding member of the California Arts Council, helping to set its direction and tone, authoring programs focused on community, schools, and prisons which still reverberate to this day. His philosophical point of view and sober concern for the creative process inspired me instantaneously. So much so, that afternoon I pitched an exhibit review proposal to Art in America that was accepted and published the following summer.

Perhaps more importantly, I felt alone as a Black artist, educator, and writer. I had no role model for the type of creative experience I sought to create and fashioned a career using Motherwell and Smithson as my beacons, until I met Noah. After his talk I felt a new sense of being; my lungs filled with oxygen, and I may have seen the horizon for the first time. Oddly enough, I didn’t go up and introduce myself. I do not know why. Life is funny that way.

A couple of years later I was invited to the Flintridge Foundation’s Awards Luncheon where they honored creative people of note in the California community. During the meet and greet, Sue Welsh asked if I was the same Joe Lewis that wrote about Noah’s retrospective in Art in America. When I said yes, she took me to Noah’s table and introduced us. I don’t remember what we discussed. Afterward, Sue said Noah thought the article I wrote was very insightful and one of the best pieces anyone had written about him to date. Sue suggested I visit the Joshua Tree site. I did, and thus began my relationship with Noah, and subsequently, the newly formed Foundation. 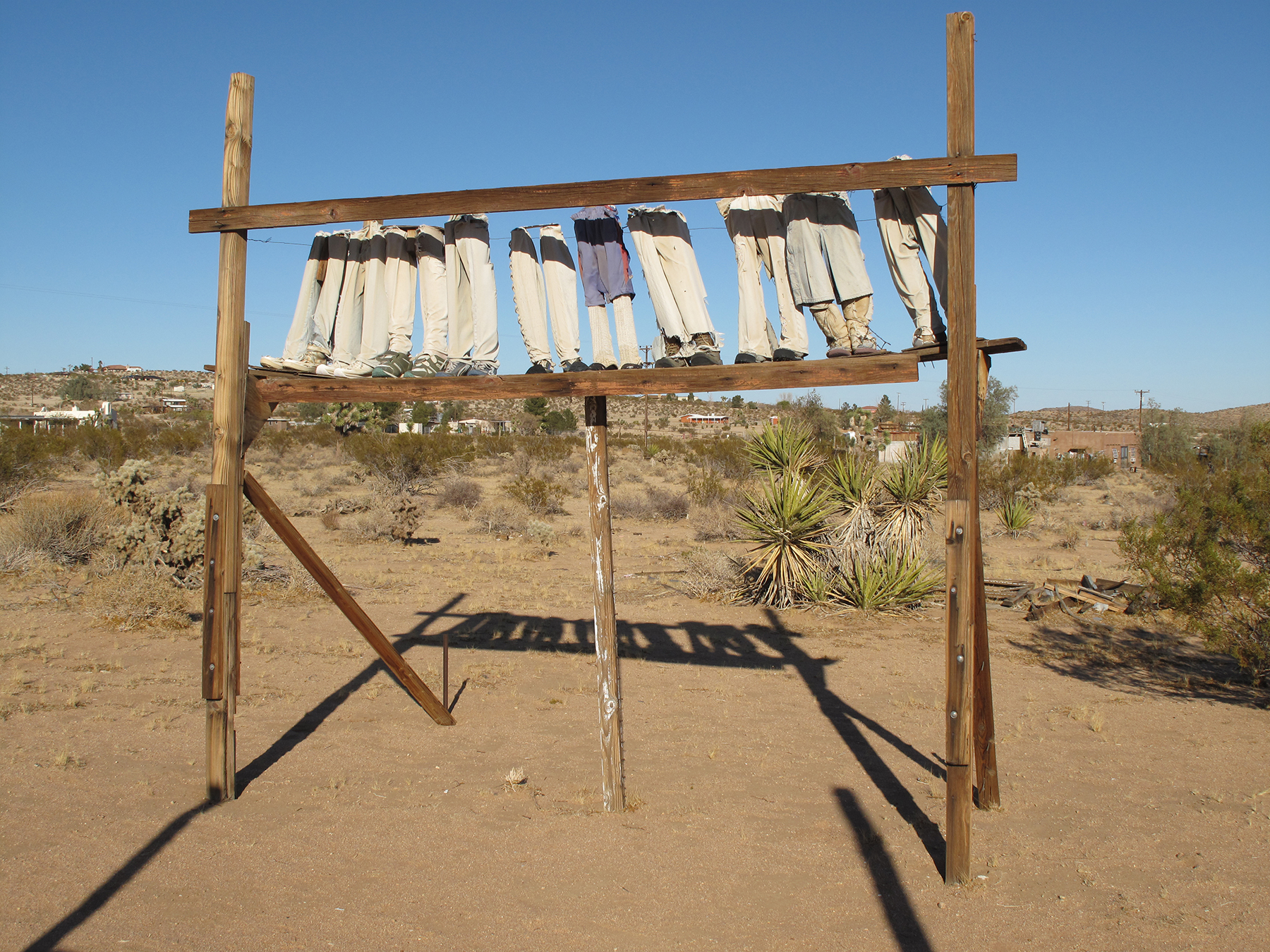 Cándida Smith: What made you, a busy artist and educator, decide to join the board of Noah’s foundation and then become its president?

Lewis: Service has been the touchstone of my entire professional career so when Sue asked me to join the small, volunteer-driven Noah Purifoy Foundation (NPF) as a Trustee, it was a no-brainer. Though I have to admit, initially, Noah was not on board with the idea of preserving the site and his work. That made working on his behalf exciting. He came around when the Board rallied to stop the county from bulldozing the place because an uninformed county inspector thought his work was a junkyard and eyesore—way out in the middle of nowhere.

Richard, after you moved to the Bay Area, I became President of the Foundation. My first official act was moderating a public interview of Noah for the College Art Association’s “Distinguished Artist Series” during their annual conference in Los Angeles.

Cándida Smith: Noah was critical of art as a thing in and of itself.  He thought of art as way of thinking about the world that provided special ways to solve problems.  We can look at the sculpture park as this amazing monument that a gifted man left us or as a prolonged investigation into making art relevant for the contemporary world.  How does the Purifoy Foundation balance promoting Noah’s work as a major contribution to U.S. culture with his idea of community-based art?

Lewis: It’s impossible to consider Noah’s artmaking without thinking about community. Noah’s commitment to community and the creative process are well known. It anchors NPF’s philosophy and serves as the underpinning for all of its communications. Upon his arrival in Joshua Tree, he replanted the ideas he nurtured in the Watts Towers caldron. Many of the works on site include “coveted treasures” and junk brought to him by locals. Those collaborators still visit the site and look at themselves reflected in his finished pieces, marking time in concert with the changes his ongoing partnership with nature contributes. Furthermore, texts in both of his retrospective exhibitions, catalog essays from groups shows, and domestic and international media exposure emphasize this commitment; Noah and his outdoor museum are recognized and embraced by the art world for those agencies and principles.

Cándida Smith: Noah often said he did not care if his work survived.  He was interested in how it changed over time interacting with the desert environment at Joshua Tree.  How does the Foundation reconcile its conservation practices with Noah’s frequently stated interest in letting work change?

Lewis: Noah’s acceptance of the local environment as a collaborator makes conservation, preservation, and restoration of his pieces much less formal for us. Rejecting preciousness and stasis, we work in “the spirit of Noah,” using similar materials to repair his installations and sculptures when necessary, and the desert location, his ongoing collaborator, blends whatever we do back into his pieces with seamless acuity.

Cándida Smith: Have any of Noah’s pieces offended visitors to the sculpture park, or been particularly difficult for people to understand?

Lewis: Except for an errant county land inspector or two, I have yet to find anyone offended by Noah’s work. In fact, though some people may not like it, everyone is struck by its monumentality, sincerity, and deep archetypical connections to our culture and society. His work is approachable and open to interpretation because it exists in multiple theoretical dimensions. If one is not familiar with any particular aspect of it—be it, aesthetic, philosophical, or social, etc.—he left enough links for the viewer to grab onto so they can find their way to it. People of all ages respond positively to it. 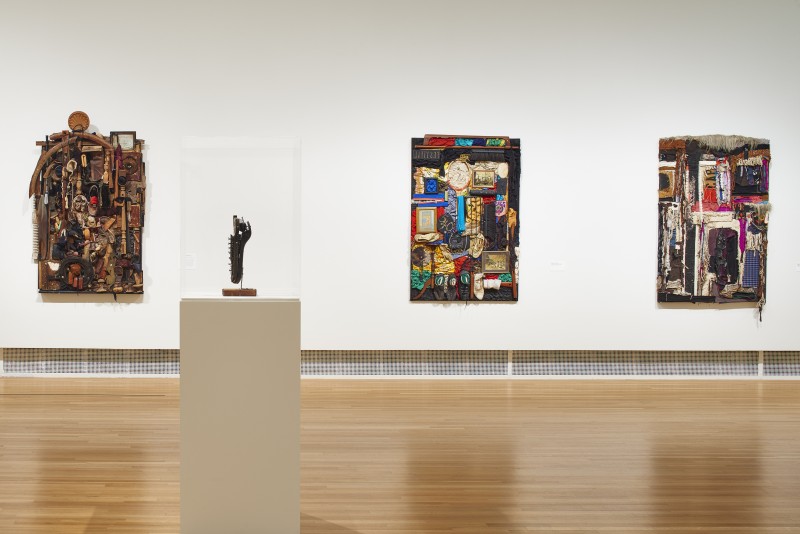 Cándida Smith: How have you worked to educate the public about the pieces in the sculpture park?

Lewis: The Foundation established an Education Center adjacent to the site after Noah’s passing in 2004, anchored by the latest publications, including the facsimile edition of High Desert, a collection of Noah’s personal notes about his philosophy and artworks, and, Junk Dada, the comprehensive catalog of his 2015 retrospective at LACMA. Well stocked with books, brochures, news clippings, and videos, visitors have an excellent opportunity to delve into Noah’s thoughts and many critical reflections about his work. NPF also provides docent support for group tours.

Junk Dada, which was organized by LACMA and curated by Franklin Sirmans in collaboration with Yael Lipschutz, an NPF Board member, was named one of the top 10 exhibitions of 2015 by the New York Times, Artforum, the Los Angeles Times, and Hyperallergic.com. It received an extraordinary amount of press, gave the Foundation an incredible visibility boost, and created a lot of critical and exhibition opportunities for NPF to reach outside of its Southern California community and enter the mainstream arts conversation.

Cándida Smith: Is there an apprentice program at the foundation that engages communities that were important to Noah in the preservation of his work?

Lewis: In 2014, NPF began “Gil Friesen Day,” an educational outreach program, partnered with the principal and a teacher at Markham Middle School in Watts, and brought 30 plus students, by bus, to the Joshua Tree site. Most of the students had never been outside of Watts, let alone to the desert. It is an all-inclusive program that includes a pre-visit curriculum and follow-up activities at the school. NPF chose Markham because of Noah’s relationship to the area and its proximity to the Watts Towers Arts Center. Sue Welsh taught there back in the 1960’s, when she also first met Noah. The inaugural class had an extra treat, they visited Junk Dada at LACMA and received a copy of the exhibition catalog. NPF plans to run the program on a biennial basis. Other programs are in the works to coincide with the centennial anniversary of Noah’s birth. 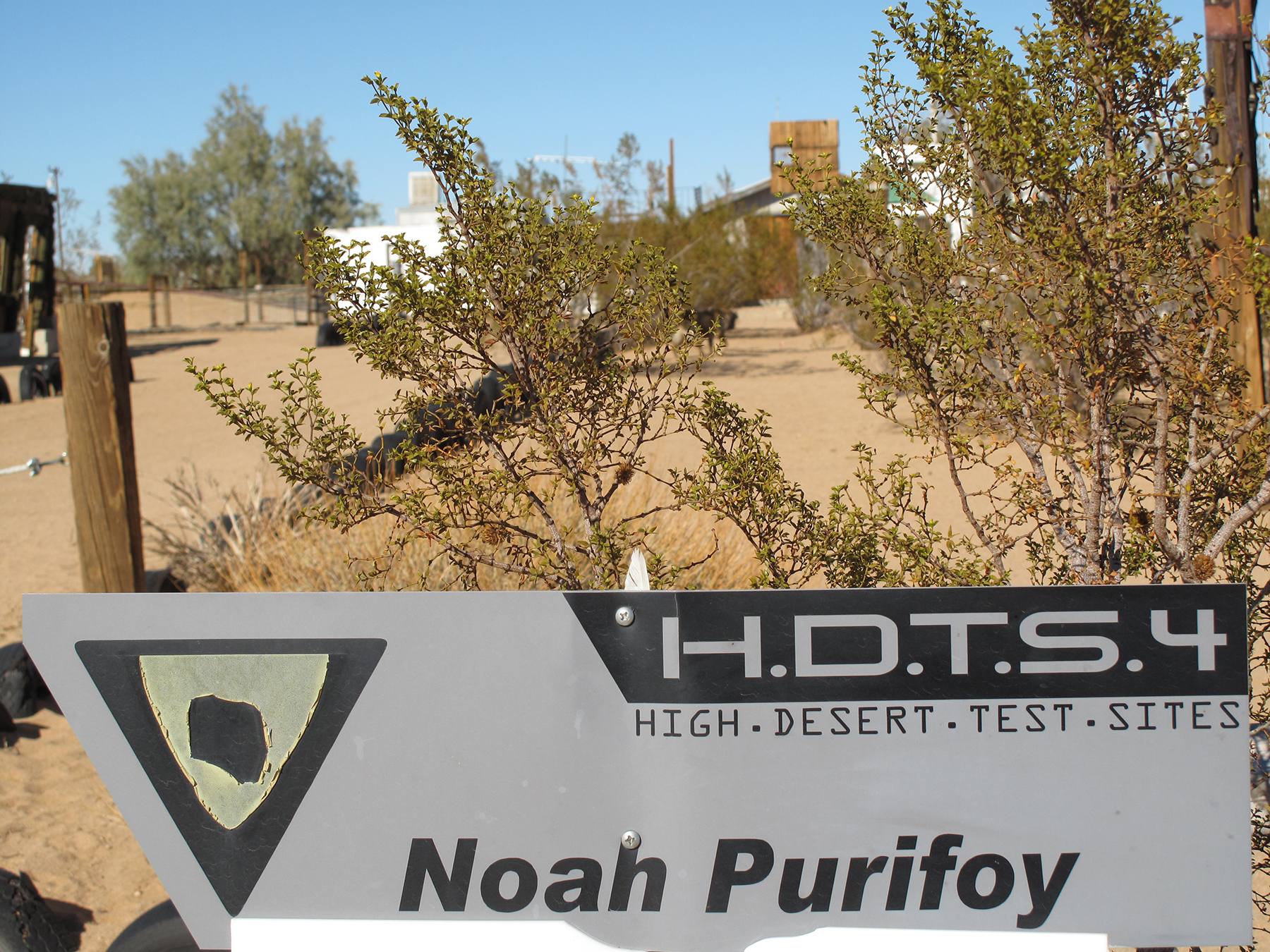 This signage was placed by High Desert Test Sites, an organization that works with artists and their temporary and permanent art sites in Joshua Tree, Yucca Valley, Twentynine Palms and Pioneertown.

Cándida Smith: What are some of the key projects the Foundation has going now, and where should people go if they want to learn more about Noah and the Foundation?

Lewis: Currently, NPF has a few initiatives and programs in motion, starting with special high school and college student site visits led by a local artist Cathy Allen, Art Department Chair at nearby Copper Mountain College. We also grant permission to artists inspired by Noah’s ideas and works to interact with the site, most notably Hannah Collins a British photographer, whose residency resulted in a solo exhibition shown in Germany and the United Kingdom. And during the annual art tours including “High Desert Test Sites” and activities sponsored by Morongo Basin Arts Council, NPF provides trustees to engage diverse groups of visitors and the local desert community in conversations about Noah, his creative process, and philosophy.

In the near future, NPF will launch a Kickstarter campaign to fund the engineering and final design costs for a new, sustainable, climate controlled facility to house the archives, education center, and a residency program. This will likely coincide with Noah’s Centennial anniversary in 2017, when NPF plans to host a series of activities and events to celebrate the site and Noah’s achievements.

Joseph S. Lewis III is President of the Noah Purifoy Foundation and Professor of Art at the University of California, Irvine.

Richard Cándida Smith is Professor of History at the University of California, Berkeley. He has written on arts movements in California, France, Mexico, Brazil, and other countries in the Americas.