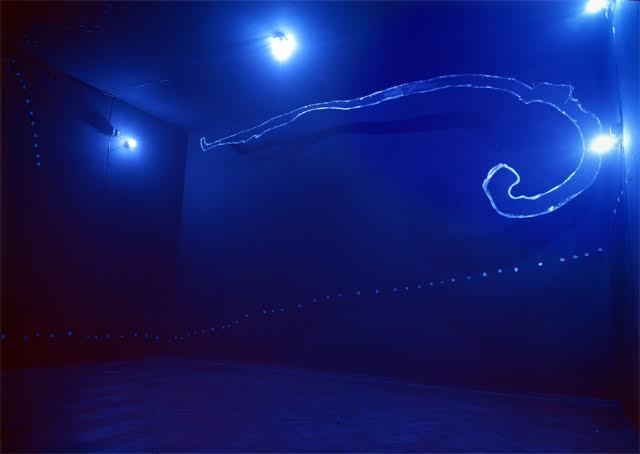 Trained in both conservation and art history, Marina Pugliese is a curator and museologist who is presently enjoying a sabbatical from her role as director of three allied Milanese art institutions: the Museo del Novecento, the Galleria d’Arte Moderna, and the Museo delle Culture. Having relocated to San Francisco, she is now a professor at California College of the Arts, curator of Mapping the City (a project sponsored by the Italian Cultural Institute), and co-curator of Lucio Fontana: Ambienti/Environments, a major exhibition being organized by Pirelli HangarBicocca in collaboration with Fondazione Lucio Fontana, Milan. Robin Clark recently met with Pugliese to learn about the breadth of her practice and her interest in producing historically accurate reconstructions of artworks as a preservation strategy.

Robin Clark: Marina, you wear so many hats professionally. Can you tell me how you got started?

Marina Pugliese: I started studying as a conservator focusing on ancient paintings and frescoes, and then I did a specialization in contemporary art conservation. At the same time I was also studying art history. When I finished that program, I received a two-year grant from the Accademia di Lincei in Rome for a project related to contemporary art techniques, which required practical experience at a public institution. The institution that supported me was the Academy of Fine Arts in Brera, where I researched plastic as an art material. That research, which included interviews with some important Italian artists and a bibliography on contemporary art techniques was uploaded onto the Cons Distlist by Stanford University.

After that I received another grant, which allowed me to study at the University of Paris 1, where I worked on the topic of “the void” in contemporary sculpture. My work has always been about both materials and the lack of materiality, or the idea of dematerialization.

Clark: What was your first job after university?

Pugliese: I taught Italian language and literature at a middle school in a small village in the Alps for a while. My students were mostly the children of shepherds and they spoke a very particular dialect, one of the oldest languages in Europe. Italian to them is like a second language. The children were beautiful and the light there was very strange – during some months of the year it seemed as if everything was either black or white, there was no color, because there was no direct sunlight.

Clark: And your first museum position?

Pugliese: In 2000 I became curator at Museo del Novecento (which was still under development) and also at the Galleria d’Arte Moderna (which was open to the public), both of which are in Milan. I spent most of my time researching the collections. I also invented a project in cooperation with the University of Milan, supervising final theses for students studying contemporary art techniques and materials. I had the students focus on specific works in our collection that had been made with experimental processes. I published a book amplifying that research titled, Tecnica Mista. Materiali e Procedimenti nell’Arte del XX secolo (Milan: Bruno Mondadori, 2006), although unfortunately it exists only in Italian.

Clark: What were some of your biggest challenges as a curator at that time?

Pugliese: It wasn’t easy, but I was able to convince the city manager that we needed proper art storage, meaning museum-quality warehouses. Then we did an in-depth study of the collection and conservation of works including some major installation pieces.

Clark: Can you give an example?

Pugliese: I discovered Coma, 2000-01, a complex installation work by Russian architect and sculptor Alexander Brodsky that had been purchased by the city of Milan with no stewardship plan. An enormous installation made from hundreds of clay elements shaped like small buildings, it also features tanks that leak petrol and three videos. The city purchased the work without any instructions, and we had to figure out how to take care of it. This was at the time when the Tate and other institutions were working on the publication, Inside Installations. The difference between what they were doing and what our project could be was that Inside Installations received massive funding from the European community, while in normal life a museum can’t invest 20,000 euros on the study of a single object. You have to find a tool that is easy to use and less expensive.

So we imagined an interdisciplinary project including a conservator, an architect, and myself to find a way to conserve installations. We created the first inter-museum project in Italy, which included significant contemporary art museums both public and private: Museo Novecento, the MAXXI in Rome (a national museum), the Mart in Trento (a provincial museum), the Peggy Guggenheim Collection in Venice, and the François Pinault Foundation in Venice. Each museum brought case studies from their collection: Brodsky for the Novecento, Bill Viola for MAXXI, Rudolf Stingel and Franz West for Pinault, Matthew Barney for Peggy Guggenheim, and Mario Merz for the Mart in Trento. Out of this came a book, Ephemeral Monuments: History and Conservation of Installation Art, edited by Barbara Ferriani, a conservator with whom I’ve collaborated for many years, and myself. First published as Monumenti effimeri. Storia e conservazione delle installazoni in 2009, it was translated into English by Getty Publications in 2013. When the book was coming out, I received a scholarship from the Getty and was able to do research there for three months. 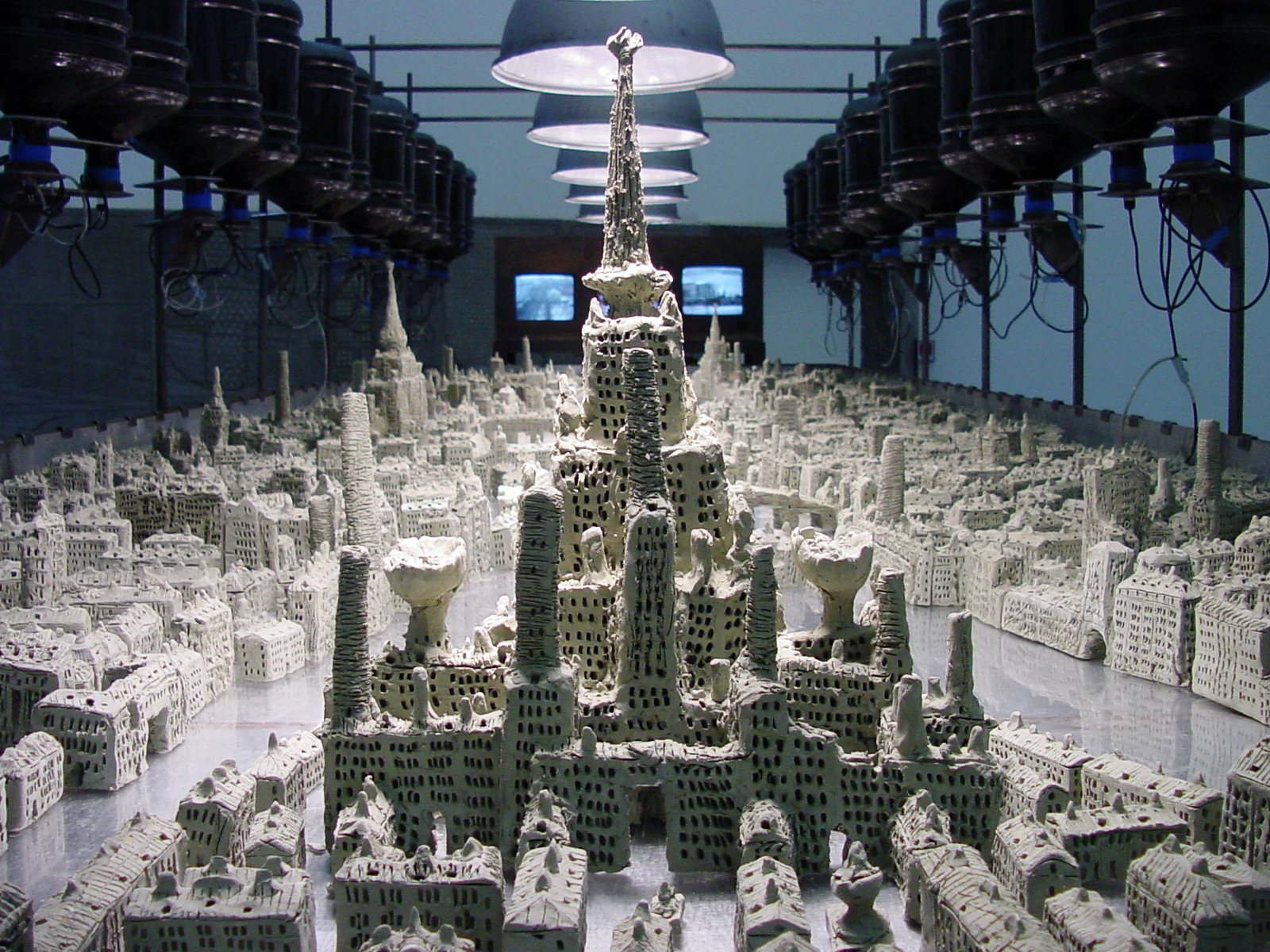 Clark: What kind of research did you do during your residency at the Getty Conservation Institute? Was it follow-up to the book or something else?

Pugliese: It was a completely different project on Lucio Fontana. I’d been doing Ph.D. research on Fontana at Udine, a university that is closely connected to the Scuola Normale Superiore di Pisa. My committee suggested that I focus on archival research, which I did, and at the Getty I was able to dig deeper into the material aspects of Fontana’s installation works. Fontana was from Argentina, and spent his life between Italy and Argentina. When he started using fluorescent lights in the late 1940s, he was using materials that were produced in California and so it was useful to be researching in Los Angeles.

Clark: I understand that the art history piece of your research was largely archival, but what were you doing at the GCI in terms of material study? Was there a chemistry component to your work?

Pugliese: No, not specifically. Let’s say I was using all the tools the Getty makes available for research. They have the museum, the conservation institute, and the research institute. Normally in any institution you have just one of the three. It’s just art history or just analysis, or just about museum studies but there you have all three and can share your ideas with many colleagues, so it is an important program. As a scholar the only thing you have to give back is a talk, but this talk obliges you to come to terms with what you have researched, and the outcomes of what you are doing, which is very useful. In addition to working on Fontana, I was also able to study different models for ethnographic museums in the Getty archives, which was timely because I had been asked to rethink the ethnographic collection display for the Museo delle Culture in Milan. I was able to think through ethnographic museography and come up with a proposal that helped the museum become an interdisciplinary space by putting its ethnographic collection in dialogue with contemporary art. In this way, the Getty funding also helped me in my career as a museum director.

Clark: What happened at the end of your time at the Getty?

Pugliese: When my Getty research was finished, Vincente Todolí (former director of Tate Modern and at that time on the committee of the Novecento) invited me to curate an exhibition of Fontana’s installations at the private foundation Pirelli HangarBicocca that he directs. It is a huge space in Milan, a venue for contemporary art devoted to experimentation, research and also to artists of historical importance. They have presented exhibition projects by Dieter Roth, Juan Muñoz, Joan Jonas, Philippe Parreno, Carsten Höller, for example. It was like a dream come true. That’s what’s happening now. 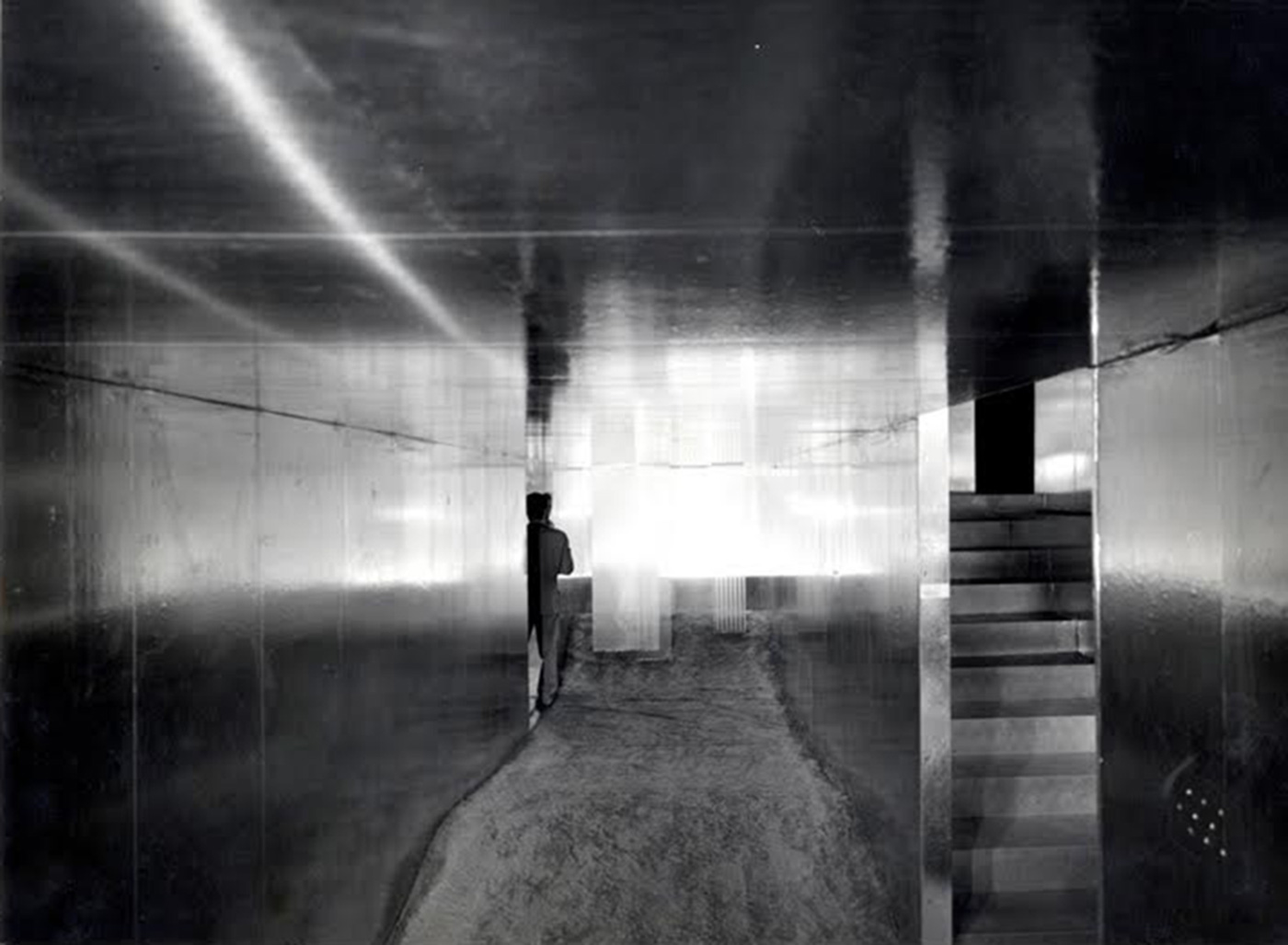 Clark: What is the scope of the project?

Pugliese: The exhibition focuses on Fontana’s corpus of spatial environments, studied and analyzed through a meticulous review of the sources (letters, architectural plans, photographs, review, and films) and new interviews, reconstructing philologically a number of environments, some of which have not been re-fabricated before. Major spatial environments, including Utopie (1964), a red corridor made for the thirteenth triennale in Milan, will be seen for the first time in decades. The refabricated works will be made according to the original plans using period materials that were used by the artist. We are planning to present thirteen environments in the show. 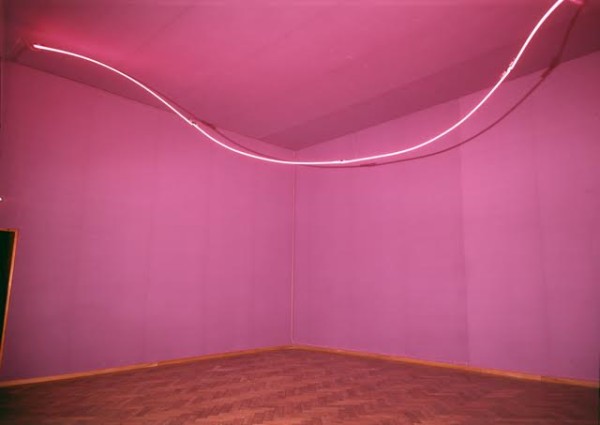 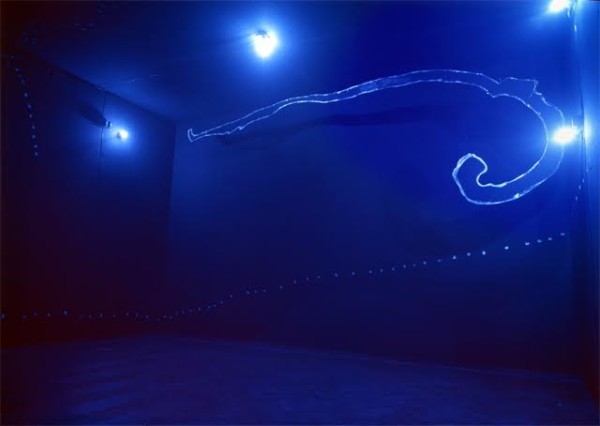 Clark: What makes Fontana’s work so compelling for you?

Pugliese: Since his first experiment, the Spatial Environment in Black Light, produced in 1949 in Milan, Fontana spent his life exploring the threshold between materiality – for instance, the use of fluorescent colors on papier-mâché – and immateriality, such as the effect of a black light in the empty space of a dark gallery. Throughout his career, Fontana exhibited his environments at international events including the Venice Biennale in 1966 and again in 1968, and Documenta in 1968, as well as at international museums like the Walker, the Moderna Museet in Stockholm, and the Stedlijk Museum in Amsterdam. Considered mainly as temporary and site-specific works, nearly all of Fontana’s environments were destroyed at the end of the exhibitions and only a few of them have been reconstructed after his death, and not with a completely historical approach. Our show will be the first to center on Fontana’s groundbreaking environmental research.

Clark: You are co-curating this with a robust team. Who’s involved?

Pugliese: I am acting as the art historian. I wanted a curator with more experience than I have working in three dimensions, and that is Vincente Todolí. We needed a conservator to lead the re-fabrication of the work, and that is Barbara Ferriani. We will also work closely with an architect, who will need to translate all the archival and technical information into real space. The architect will develop a proposal, which the curatorial team will review.

Clark: Where have some of the best archival finds surfaced for you?

Pugliese: The Walker organized an important exhibition, Lucio Fontana: The Spatial Concept of Art, in 1966. The Walker’s archives relating to that show are impressive, because they were trying to travel the exhibition, so they gathered a lot of information to promote it. There is a letter in the file to the director of a museum in Argentina, explaining in detail the layout of the show and its historical importance. The responses to the Walker offers of the show were very interesting in terms of reception. Some directors called Fontana’s work kitschy, while others said he was brilliant but they could not afford the fees. There are also reviews of the exhibition in the Walker files, and critics were talking about the show in terms of instability and a puzzlement that they felt when trying to navigate the space of the installation. This had something to do with the ultra violet lights, a spongy rubber floor covering that your feet sank into, and drawings in fluorescent colors that covered the walls, the ceiling and the floors. In the Walker archives we learned the details about the floor as well as its height and angle so we can reproduce that exactly. I think this is very important because it completely changes our understanding of Fontana’s approach to space.

Clark: When will your show open?

Robin Clark is Director of the Artist Initiative at the San Francisco Museum of Modern Art.

Marina Pugliese is an independent art historian based in the San Francisco Bay Area.

Cite this article as: Robin Clark with Marina Pugliese, "Between Materiality and Immateriality," in VoCA Journal, May 17, 2016, https://journal.voca.network/at-the-threshold-between-materiality-and-immateriality/.