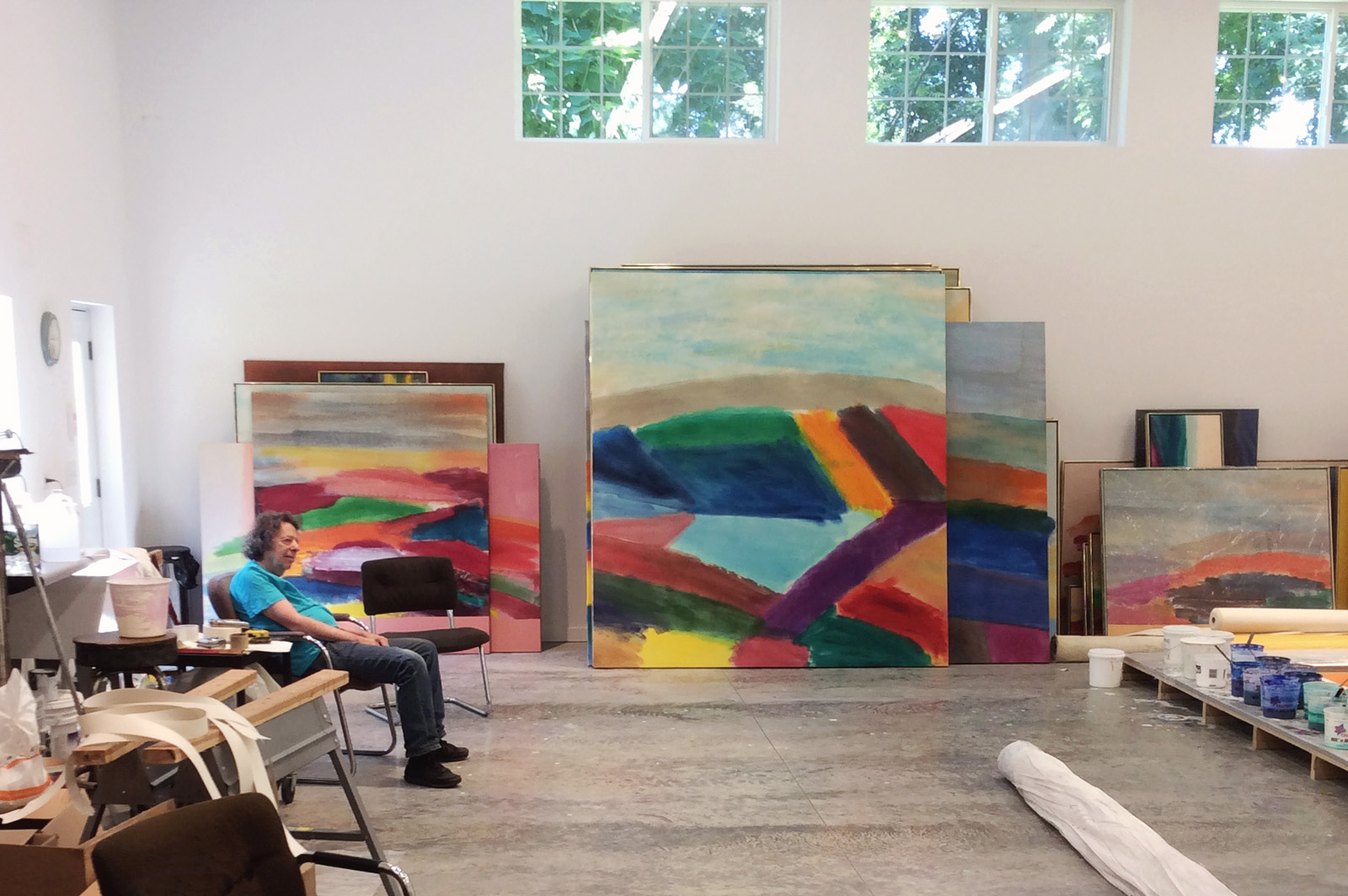 When the storm surge from Hurricane Sandy struck Lower Manhattan on October 29, 2012, artist Ronnie Landfield’s Tribeca studio was flooded, forcing him to relocate. He moved from the city to a two-hundred-year-old farmhouse on several acres in New Windsor, New York, not far from Storm King and West Point. On July 31, 2015, in advance of Landfield’s 2016 retrospective at Stux & Haller Gallery and as a follow-up to his participation in the Dedalus Foundation/VoCA ‘Voice of the Artist: Hurricane Sandy’ interview program, I sat down with the artist to discuss his experiences and practices. The following are excerpts of that conversation.

James McElhinney: What concerns guided you in building your new studio?

Ronnie Landfield: I knew that I needed to have the same size painting table as I had had in the city 12 x 26 feet, a sink nearby and a separate section that would be for storage. Dan Christensen had in his studio a long wall, the back of which was all painting racks. On the opposite side was a wall on which Dan painted. Because I paint on the floor, my needs were different. A lot of painters work on the wall, or on an easel. I don’t. My work is done more or less horizontally, although I exhibit my work on the wall. I like painting on the floor. I always have, even when I was a kid. I have worked with all kinds of paint—enamel, oil paint and all sorts of crazy concoctions that drove my father crazy, but I always painted on the floor. One day, in 1968, I was pouring paint out of cans onto stretched canvases when Larry Poons asked me, “Why don’t you get rid of the stretchers?” After that I stretched the canvases directly onto the floor. It came right out of Pollock, but I give Larry credit. I took a ten-foot roll of canvas, rolled out thirty feet, and then stapled it to my floor. I generally like to use cotton duck number 10 because it’s heavier than number 12. It seems to take the paint and is conducive to working (soaking and staining) in acrylic. I lived on the top floor at 94 Bowery. It was a loft, but it was a walkup. I went to work on a big stain painting and my neighbor downstairs went ballistic. The paint had come through the floor. He came banging on my door. “Are you crazy man?” he screamed. I learned from that. I put Masonite down across the floor, covered it with plastic and didn’t have any more problems. Later I started using a painting table like the one you see here. I got the idea from Bill Pettit, who had one in LA. I made two…a big one and a small one. In time I got rid of the small one. Making the back edge slightly higher than the front helps me control large washes of paint because of how they seek gravity.

McElhinney: How much emphasis did your teachers place on craft and process when you were in art school?

Landfield: None! We abstract painters just learned from each other. I might go to somebody’s studio or they might come to mine, see what was going on and then go back and try it themselves, like the story I just told about Larry [Poons]. 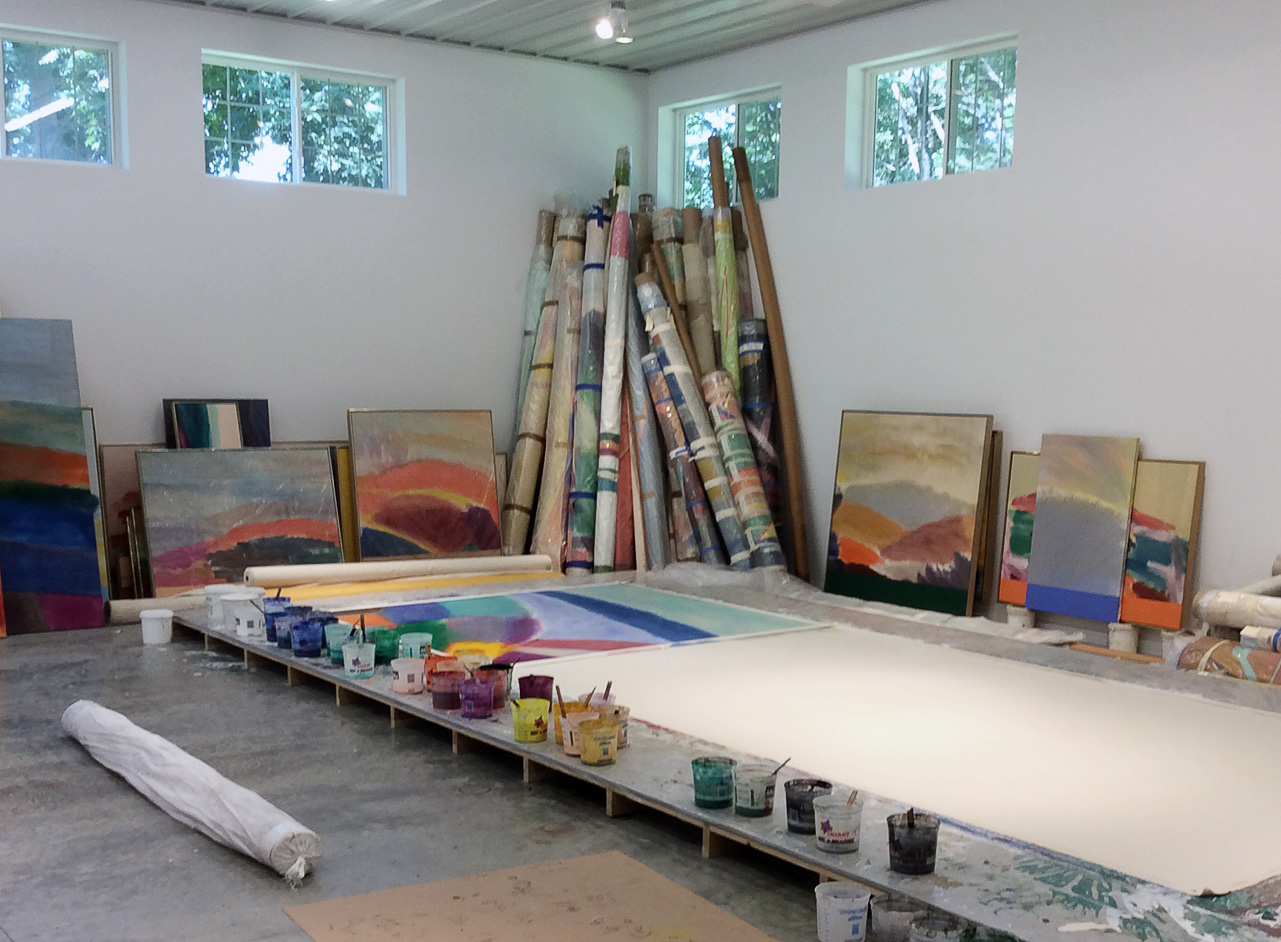 McElhinney: How did you learn about materials? You must have known Lenny Bocour and Sam Golden. Lenny was famous for trading paint for art with emerging talents, and amassed quite an impressive collection.

Landfield: I did know Sam and Lenny. They’re both gone but Sam’s son, Mark Golden, is a good friend. It started when Larry asked me to teach his class at Bennington, where Ken Noland also taught. One day I asked Noland, “How do you get the canvas to accept the stain?” He told me, “You use this stuff called water tension breaker.” It wasn’t like you could walk into an art supply store and buy it. I think I might have gotten some from Ken but I needed my own supply. One day Larry said, “Call Lenny Bocour!” In those days, Lenny and Sam Golden had their factory on 52nd Street between Tenth and Eleventh Avenues. They invited me to take a gallon in every color of Aquatec acrylics. I thought Aquatec was too thick. Painting with rollers in those days, Liquitex was easier to use because had a more fluid consistency. Lenny and Sam showed me how to use Aquatec with a water tension breaker. Today I only use Golden acrylics, which is the same as Aquatec with a new name.

McElhinney: I recall a story Lenny Bocour told about visiting Jackson Pollock. He went to the studio, found it open but Pollock himself was nowhere to be found. A large canvas was tacked to the floor. On it was a rough charcoal drawing mapping out the composition for a new drip painting.

Landfield: I believe it. That’s not the way he was supposed to work but it sounds about right. Selden Rodman wrote a book called Conversations With Artists. One of the artists he spoke with was Jackson Pollock, whom he met on a hot summer day. Pollock’s barn studio was full of paintings that now hang in major museums all over the world. In July of 1956, Pollock hadn’t painted for a year. He knew he was a great painter but felt misunderstood by the art world. “You can’t repeat yourself,” [Clement] Greenberg told him. When he showed in 1952, Pollock was attacked for repeating himself. In ‘53, he was all over the place; in ‘54, he was hardly painting at all and in ‘55 he stopped altogether. Had he kept going, something would have emerged. Two weeks after his meeting with Rodman, Pollock was killed in a car wreck.

McElhinney: That is some story. That barn would have been a conservator’s nightmare. Did you ever face the same kind of pressure, to always come up with something new?

Landfield: Greenberg tried to tell me what I could and couldn’t do. He did that to everybody. He told me that I couldn’t combine these hard-edged borders with this landscape or that abstraction because it was like speaking two different languages. “It doesn’t work,” he would say, “It’s not unified.” I didn’t care about unity. What I was trying to say, trying to reflect, is that life is all about duality. Duality is what we got. There’s this direction and there’s that direction. There is nature and there’s man-made. It all adds up to the world that we live in. It’s an old man’s game, believing that you can’t repeat yourself. I’m going to do whatever the fuck I want because that’s what artists do. Greenberg got under everybody’s skin. Ken Noland believed all that for a while but in the end he went back to what he did best. In the seventies I went back to staining and never looked back.

I met Larry [Poons] in 1967, sitting in the bar at Longview Country Club, a restaurant across Park Avenue from Max’s Kansas City. We both had work in the Whitney Biennial. In no time, we became close friends and would visit each other’s studios on a regular basis. One day Larry was finishing his next show at Castelli. The studio was full of very large, gorgeous ellipse paintings. Against the wall there was a seventeen-foot painting, a purple ground covered with ellipses. I said to him, “Trouble with you Poons is that all you ever do is the same painting over and over again.” He looked at me, like ‘What the…?’ “Yeah,” I said. “You put down a color and then you paint dots or polka dots or you paint circles and now you paint ellipses all over the painting. That’s ALL you do.” So, without a word, Larry picks up a five-gallon can of green paint, walks over to the purple painting and slams it! I was horrified. He looked at me and said, “You’re on to something kid.”

He never made another ellipse painting. After that he painted on the floor, pouring paint. All that elephant skin and cracking paint, all that started then. Maybe I influenced him. He certainly influenced me. 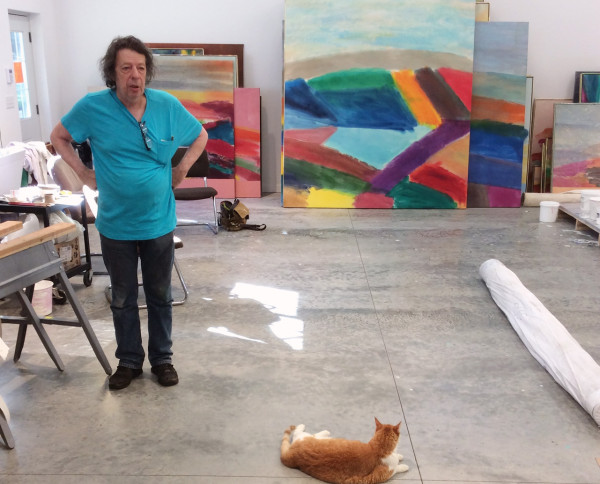 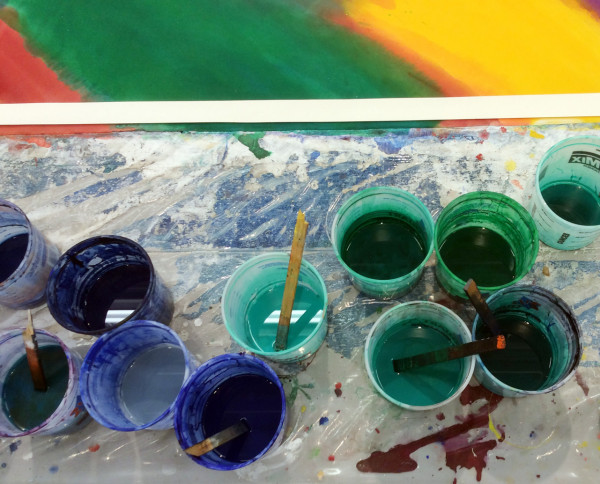 McElhinney: Have you ever had any problems regarding the conservation of your own work?

Landfield: A few. My painting Diamond Lake (1969) was shown at David Whitney Gallery before it went into the collection at MoMA. Almost twenty years later I got a phone call from the conservator asking me to come take a look at it. She wanted to determine how acrylic paints age. She visited my studio. Later I met her at MoMA. Everything about Diamond Lake looked the same, to the best of my recollection. I introduced her to Mark Golden, who organized an environmental study of acrylic paint, how it responds to light, heat, cold, and changes in humidity. I believe that study is still underway.

McElhinney: Acrylic paint has a certain elasticity lacking in oils, casein and other pre-industrial artists’ colors, but exposure to extreme heat or cold can distort it. Painting on unprimed canvas creates more fragile surfaces. Have you ever encountered difficulties with acrylic?

Landfield: I made a painting called 10 Degrees Above Zero (1970). Ivan Chermayeff commissioned me to paint a mural for Westinghouse in Pittsburgh that had to fill a space eleven feet high and twenty feet wide. Our new building on Desbrosses Street had no heat that first winter but I managed to finish that painting for Ivan. I painted it on the floor, met the deadline, rolled it up, shipped it out and never saw it again. Years later my younger son, Noah, was accepted into Carnegie Mellon. We drove to Pittsburgh. While we were there we decided to visit my painting at Westinghouse. I was surprised to see that the painting had cracked, presumably because of exposure to the cold. The impastos had cracked but the rest of the surface was okay. Maybe it happened in my studio when I rolled up the canvas to be shipped. Westinghouse never saw the cracking as a problem. They just accepted it as part of the process, even though it was not my intention. Ivan never told me what to paint. He wanted a Ronnie Landfield painting and that’s what he got.

Ronnie Landfield is an abstract painter, born in New York City in 1947. His work is in collections around the world, including the Metropolitan Museum of Art, the Museum of Modern Art, the Whitney Museum of American Art, the Art Institute of Chicago, the Hirshhorn Museum and Sculpture Garden, and the National Gallery of Art.

James Lancel McElhinney is a visual artist, writer, educator, and oral historian. He has conducted oral history interviews for the Smithsonian Archives of American Art, Columbia Center for Oral History, The Frick Center for the History of Collecting, and the Colección Patricia Phelps de Cisneros, and has exhibited his work in more than forty solo exhibitions in the United States and abroad.